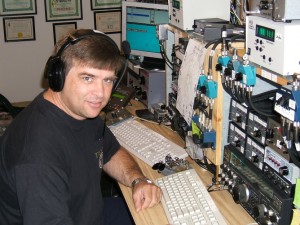 PRESS RELEASE
CQ WW Contest Director K5ZD, Randy Thompson, will attend the Norwegian Ham Meeting 2013, to be held at Letohallen (close to OSL airport) 19. through 21. April.
K5ZD Randy is an experienced contester and has been inducted into the CQ Magazine Contest Hall of Fame. He has made major achievements, both from his own station and also as part of American multi-op teams. He has been Contest Director for CQ WPX Contests and last year CQ Magazine appointed him Contest Director for the world’s largest contest, the CQ WW DX Contest.
K5ZD Randy was invited by LA Contest Club and he will be the main guest speaker on the Contest Forum Saturday 20th April at 2 PM. He will give two presentations, one intended for beginners within contesting, and one aiming to be of interest for the more experienced contesters, so there will be something for everyone. The presentations are in preparation, and titles have not been finally set.
Do not miss the opportunity to attend presentation by K5ZD Randy, or to meet him at the Ham Feast on Saturday night.